Babut is an enemy that appears in Kirby's Dream Land 3, Kirby's Return to Dream Land, and Kirby's Blowout Blast.

Babut is a round, blood-sucking bat with black fur. It has piercing white eyes, an orange nose-shaped snout, and lengthy, leathery red wings. The insides of Babut's ears are also bright red.

Babut will lie dormant while clinging to a ceiling until Kirby passes underneath, after which it will swoop down and chase after Kirby. If it makes contact with Kirby, it will latch on to him and begin draining him of his health. If it comes in contact with a floor, cliff, or wall while doing so, it will stop chasing him and fly off in the opposite direction.

Babut's attack has changed: It now latches on to Kirby and attempts to bite him three times. The player can break the hero out of its grasp by rapidly shaking the Wii Remote or mashing the +Control Pad. Babut also appears in the Wing Challenge.

Babut appears in Stages 1 and 3 of Level 5, Stage 3 of Level 5 EX, and Stage 5 of the Secret Path. It rushes at Kirby but can no longer latch onto him. Like most enemies in the game, scaled-up versions of it appear that can be inhaled for a Blaster Bullet.

Babuts appear as audience members in the Coin Clash mode. 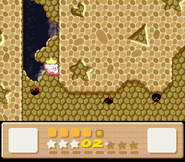 Kirby's Return to Dream Land
Add a photo to this gallery
Retrieved from "https://kirby.fandom.com/wiki/Babut?oldid=330463"
Community content is available under CC-BY-SA unless otherwise noted.