A red beret with a star off to the side. Kirby has a stain of blue paint on his right cheek, and there is magenta paint covering top of the star adorning the beret.

Artist is a Copy Ability in the Kirby series, debuting in Kirby Star Allies.

Artist focuses on using a paintbrush as a weapon, summoning enemies by painting them to life, and creating sculptures, to deal damage; Brush Slash and Brush Splash can paint blank signs to materialize Items, and counters the Sizzle and Zap elements. Artist has two Friend Abilities, Still Life and Rock Painter; Still Life paints a picture of Fridge Kirby to drop food items that corresponds to the number of Friends there are, Rock Painter paints a massive stone statue that splashes paint upon landing. Artist is obtained from the Vividria mid-boss, who is its Friend Helper.

Artist is unlocked after reaching Fighters Rank 21. It has Rare Hats based on Vividria and Elline. Artist loses its Painbrush move and Friend Abilities, such as Still Life, but now has Rising Brush Slash and Masterpiece Movement. 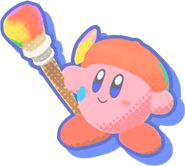