Armor Dee is a large enemy in the Kirby series, debuting in Kirby's Return to Dream Land.

Armor Dee is a group of three Waddle Dees inside a large, mechanical Waddle Dee. It has a cream-colored face with slightly darker blush marks and two vertical slots for eye holes, a red main body with slots on the right and left sides for the arms, and a brown top equipped with a yellow periscope.

Being made of metal instead of paper, Armor Dee is much more durable than Puppet Dee. However, it behaves in the same way as its cousin, walking in a set path back and forth. When destroyed, the Waddle Dees under it will fly in random directions. The foe can be Super Inhaled whole but grants no Copy Ability when swallowed. The Ice Ability can also ignore their defenses, as they can be frozen without letting them break.

When visiting Halcandra, the player will come across the Halcandran Armor Dee. It behaves just as the Armor Dee, except it has a different appearance to reflect those that are controlling it, Halcandran Dees. 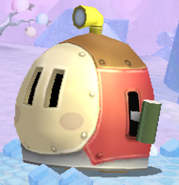