Large enemy
Antlers are large enemies in the Kirby series, debuting in Kirby: Triple Deluxe. They are summoned by Queen Sectonia during the second and third phases of her battle. Antler comes in four types, each armed with a club and shield. Antlers are very durable enemies who resist knockback until their health is depleted, but they can be defeated in one hit by Queen Sectonia's own attacks. They attack Kirby by using magic and bashing him with their clubs.

Large enemy
White Antlers are the smallest and weakest of the Antlers. Queen Sectonia summons them in groups of four during the second phase of her fight, and in a group of five during the third phase of her fight. They use their club to blow icy wind and grant the Ice ability when inhaled.

Large enemy
Easily the largest and strongest of the Antlers, Lord Antler is only summoned by Soul of Sectonia. It shoots blue magic blasts that produce stars on contact with the ground or the edges of the screen. Unlike the other Antlers, Lord Antler are the only variants that grant Kirby no Copy Ability when inhaled. 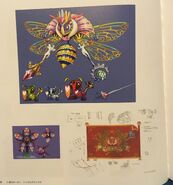 A statue of an Antler, seen in Stage 3 of Royal Road

Lord Antlers
Add a photo to this gallery
Retrieved from "https://kirby.fandom.com/wiki/Antler?oldid=334730"
Community content is available under CC-BY-SA unless otherwise noted.