The amiibo Statue is a location in the Kirby series, debuting in Team Kirby Clash Deluxe. It is situated in the Dream Kingdom village.

The amiibo Statue is pearl-bronze statue of Kirby with his arm in the air and mouth open. It stands on a stone pedestal adorned with a plaque. The plaque appears to have indecipherable writing on it.

The amiibo Statue is stationed at the far left side of the village, next to the Shoppe. If Kirby stands before it and presses ↑, the player is instructed to tap an amiibo figure or card to earn Fragments (though he/she can back out instead if there is a need). Different amiibo from different categories yield different prizes:

The amiibo Statue and its prizes have limitations. Only five amiibo can be tapped each day, and one cannot be used repeatedly during that period. All Fragments earned by one amiibo are of the same type, which is randomly chosen. 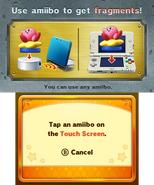 The player is prompted to tap an amiibo.