Air Gun (also called Air Pellet,[1][2] Air Bullet, Air Puff,[3] or Exhale) is a technique in the Kirby series, debuting in Kirby's Dream Land. It can only be performed while flying with a mouthful of air and lets Kirby spit the air out as an attack.

The Air Gun move can be used by any member of the Kirby species or by King Dedede. The character using this technique will first need to fly, inflating themselves, and then exhale, puffing out a ball of air that will damage most regular enemies and some large enemies. It can also be used to destroy Star Blocks. In Kirby's Adventure, the Air Gun move can destroy Ability Stars. However, the attack does not usually deal much damage, and does not affect mid-bosses or bosses. If Kirby attempts to walk into a room while holding air, he will automatically spit it out before entering. The move cannot be performed in games where Kirby cannot fly, normally in spinoff titles such as Kirby: Canvas Curse, Kirby's Epic Yarn, and Kirby and the Rainbow Curse.

The Mint Leaf and Balloon items allow Kirby to puff many balls of air out in rapid succession.

Some enemies can also perform the Air Gun technique, such as the Gigant Chicks and Whispy Woods. 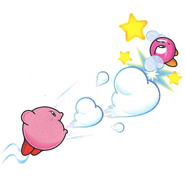 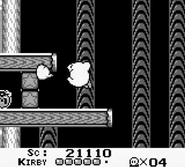 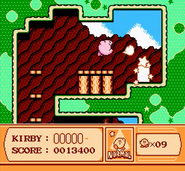 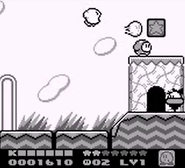 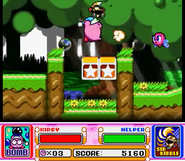 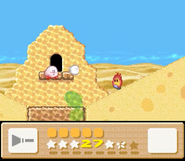 Kirby Fighters 2
Add a photo to this gallery

Retrieved from "https://kirby.fandom.com/wiki/Air_Gun?oldid=341592"
Community content is available under CC-BY-SA unless otherwise noted.