Active Blade is a character in the Kirby series. He appears in the Kirby of the Stars: The Great Bandit Daroach Gang Appears! novel.

Active Blade is a large bird with two large wings and a mane of feathers around his neck. He has a jewel on his chest and two large talons. He has long tail feathers and wears what appears to be armor or a vest around the upper half of his body. He dons a sharp beak and a long tuft of feathers on his head.

Active Blade appears as a character exclusive to the Kirby Meets the Squeak Squad! novel. In the book, Active Blade resides in a temple where he is protecting his egg. However, Kirby and Waddle Dee happen to stumble into the temple. Active Blade then begins to attack them, thinking that they are members of the Squeaks. All of this ruckus eventually causes Active Blade’s egg to fall, but before it could hit the ground and break, Kirby catches it. Active Blade then realizes that they aren’t actually part of the Squeaks and stops attacking them. He then explains that he was injured in a raid by the Squeaks, and is trying to get back to his homeland where there were hot springs that could help with the injuries. However, he couldn’t leave behind his egg unprotected, so he entrusts it in the hands of Kirby and Waddle Dee as he takes off to his homeland. He eventually later returns sometime after King Dedede also decided to help, and as he arrives, he not only finds the Squeaks, but the egg hatching into his newborn child as well.

It should be noted that Active Blade and his chick appear almost identically to Dyna Blade and a Dyna Chick. Active Blade even has a similar name to Dyna Blade. However, they are not related to them and are of a different species. King Dedede only heard about the features of Active Blade, and thought that he was Dyna Blade, which is why he decided to help protect the eggs for Dyna Blade’s high-class crest.

Active Blade’s feathers are the finest cushions, perfect for pillows and protecting eggs. In fact, they’re so sought after, that they were overhunted to the point where it is said that there are very few of them left. Active Blade had first thought that the Squeaks were after his egg, when in actuality, they were after the feather cushion that was protecting it, to which Active Blade’s chick gives to them after it hatches. 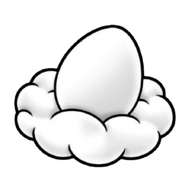 Active Blade’s chick after it hatched.
Add a photo to this gallery
Retrieved from "https://kirby.fandom.com/wiki/Active_Blade?oldid=336492"
Community content is available under CC-BY-SA unless otherwise noted.