0² resembles Zero in appearance, while also possessing angelic traits. It has a bulbous white sphere for a body and a large, dark red eye (as opposed to Zero's blood-red eye), with a black iris and a white pupil in its center (while Zero had a dark red iris with a pinprick black pupil). However, while Zero's body was completely round, the bottom of 0²'s body is slightly flat with a tiny spike or tail on the bottom. When the spike is exposed as its weak spot, it extends in length, turns bright green, and gains spines, making it look like a cactus. 0² also has a pair of segmented wings with dark red feathers at the end, a halo, and a large bandage at the top.

As Kirby enters the core of Dark Star, 0² first wears an amiable visage; two black dots resembling beady eyes above its barely open eye, which looks like a wide smile. The dark red feathers of 0²'s wings are also invisible. As Kirby and Ribbon form the Crystal Shard Gun, its "mouth" opens up wide, revealing its trademark dark red eye, its false eyes disappear as the face melds together, the feathers of its wings appear, and the battle initiates.

Rather than taking control of Planet Popstar, Dark Matter invades the equally peaceful home world of the Fairies, Ripple Star. While not seen to be producing Dark Matter forces, 0²'s role as the final boss, as well as the battle's location, suggest that it is the intelligence behind these events.

Since Dark Matter's first priority on Ripple Star is the destruction of the Crystal in Ripple Star's palace, it is apparent that Dark Matter and/or 0² knows the Crystal presents at least a credible threat to the plans in motion. It is seen near the end of the game that the reunited Crystal has the capability to purge Dark Matter or related forces from the infected people (the Fairy Queen in this case) with a beam of light and relieve them of its possession without the victim receiving a thorough beating beforehand. Comparatively speaking, the Crystal is to 0² as the Love-Love Stick is to Zero. Playing into the fairly clear light and dark themes the game presents, it suggests Zero, 0² and Dark Matter are weak against light from the Crystal at least, as well as certain positive emotions as suggested by the effects of the Love-Love Stick against Zero previously in Kirby's Dream Land 3.

0² isn't encountered until the very end of the game, and only if all 74 Crystal Shards are collected. Unless every shard in the game is collected, Miracle Matter serves as the "final boss." In the bad ending, the existence of another evil force is only hinted when the Fairy Queen suddenly smirks in villainous triumph towards Ribbon as Kirby and friends fly away. However, if all the shards are collected, the fully reformed Crystal blasts the Fairy Queen with a beam of light, knocking her unconscious and revealing that she was being possessed by a massive concentration of Dark Matter, and presumably 0² itself.

Kirby has the Ribbon + Crystal Power Combo during the fight, and Ribbon uses her wings to guide Kirby around. At first, 0² is impervious to absolutely any attack, and fires exploding energy balls at Kirby with decent accuracy. However, 0² can be stunned by continuously shooting at its eye; while it is stunned, Kirby must fly up and aim for the halo. The halo changes color each time it is hit. After enough damage is done to the halo, it disappears (and reappears after a short period of time), revealing its bandage, which only requires one hit. After shooting the bandage, 0² flips over, revealing a long, green, thorn-like tail on its bottom. This is its weak spot, so Kirby has to shoot it as many times as he can before 0² flips back over and the whole cycle repeats; however, this is complicated by the harmful green gas clouds the weak spot generates. It is also possible to damage 0²'s wings while it is stunned, which will result in it moving much more slowly and make it lose the ability to follow Kirby: if this is done, Kirby can simply move up and attack the halo without bothering to stun 0² first.

After blasting 0²'s tail with a sufficient number of Crystal Shards from the Crystal Gun, the villain explodes, destroying it along with Dark Star and its inhabitants. 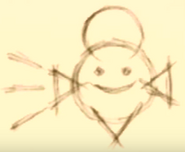 0²'s false appearance when Kirby and Ribbon first encounter it. 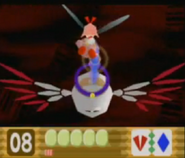 0² reveals its halo and bandage. 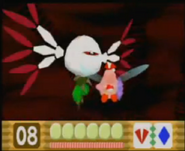 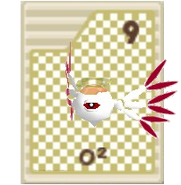