Bomber, Tac
??? (originally known as ?), is the hidden star and a bonus stage in Milky Way Wishes, a sub-game in Kirby Super Star and its remake.

This area has no fountain, and it is not mandatory to visit during the sub-game. However, it can "override" the Copy Ability restriction, by providing the Copy Copy Essence Deluxe. It must be visited to fully complete the game with 100% progress.

??? is a small, star-shaped planet whose true name is unknown. It is hidden between Skyhigh and Cavius, and is not big enough to be seen from Planet Popstar. The only inhabitants of the star are Tacs and Bombers. It has a large jungle filled with exotic plants. The level is very short, and Kirby only has to go through three short rooms. The second room has Bombers which Kirby can get Crash from. The final room of the level is the star's exit. The room contains no floor, so Kirby must be careful. The final room only contains the Copy Essence Deluxe for Copy, and a Warp Star to go back into space. Visiting ??? before any other planet is advisable, since a player can copy an ability he/she doesn't have the Copy Essence Deluxe for, essentially bypassing the Copy Ability restriction. 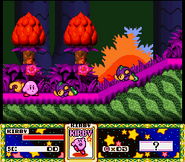 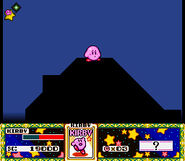