@Diff Juns you can easily just put in a 32gb sd card and your 3ds magically has more space, you can do higher than 32gb but that requires formatting it to the right format for the 3ds to detect it

(edited by Grane1234)
A reply to Cattinthespark
1

Nice, I play taiko no tatsujin as well, although I can't do anything higher than a 7 star

@Diff Juns The 3DS and Wii U eshops don't go down until next year, you just can't add funds through a credit card anymore, it needs to be through an eshop card. As for the games themselves there are:

Rhythm Tengoku for GBA - it was never officially released outside Japan but there is a fan translation.

Rhythm Heaven/Paradise/World/Tengoku for DS - The series is known as different names depending on where you live; Heaven in America, Paradise in PAL regions, World in Korea and Tengoku in Japan. As for the game itself, you hold the DS on its side while either tapping for flicking with the beat. Your best bet for finding this game would be through sites like Ebay as I believe it isn't on the Wii U Eshop

Rhythm Heaven Fever/Beat the Beat: Rhythm Paradise for Wii - This one is regarded by many to be the best in the series. Despite it being a Wii game, motion controls are barely used at all; the only time they are used is for menus, are you can still use the d-pad if you want. The game mainly focuses on pressing either A or A and B together with the beat. This game is thankfully much more easier to find than the last one as if you can't find it anywhere, you can buy it for a relatively low price on the Wii U eshop; but just so you know, both the NTSC and PAL versions have big differences

Rhythm Heaven/Paradise Megamix for 3DS - this game has no gimmicks, instead it brings back minigames from previous entries in the series while also bringing some new ones. This game also doesn't follow the traditional approach the other games used, it is by far the biggest game of all of them. As for finding this game, the NTSC versions can only be gotten on the 3DS eshop while the PAL version can be gotten both physically and digitally

Sorry for the long wall of text, I just wanted to give as much information about each as possible to help with deciding which one to get. But now that I look at it, it seems mostly redundant from what you said earlier

I've watched the whole series multiple times before and I would say Tiff isn't a Mary Sue (at least in the English dub). A lot of the show definitely focuses on her, but it doesn't revolve around her, that role belongs to Kirby himself. And she definitely has flaws, she is shown to be uptight most if not all the time; A good example is her constant yelling

The hardest one for me was probably getting the target time in the first hammer road. The timing was so strict, it forced me to cut most corners and STILL just barely miss it

@BeesAgain but 8 also says, "Maybe I was once an elf?" so it could very well be Elfilin

It's ment to look like Kirby's name either way so...

Yeah, that's the whole joke. the fact that if you replace the R with an I, you get Kirby

Don't be fooled by his size, you wont believe your eyes

The Goliath is here, that's right cower in fear

YA HOLER 'N' HOOT, YER GIVE KIRBY THE BOOT 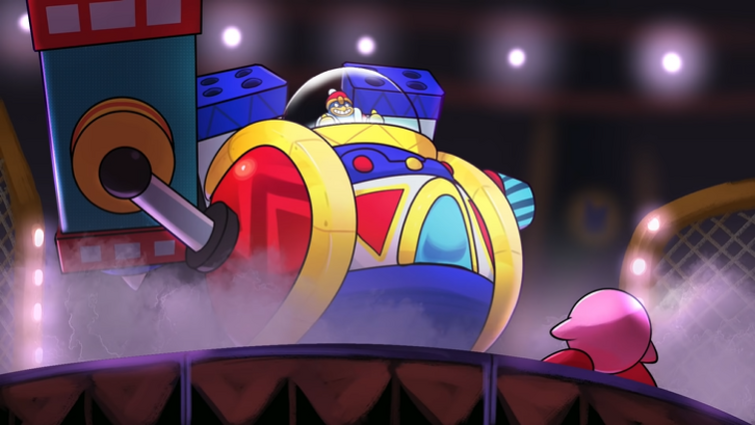 Next song: Dedede, that's the name you should know

Skill Issue, I managed to make it out under an hour. All levels and difficulties completed

You DO know that Artist also has that move right?