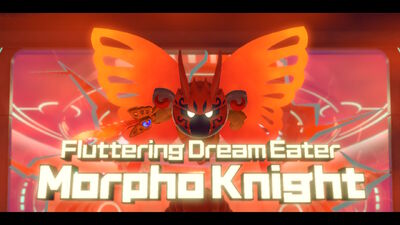 Morpho Knight is a character in the Kirby series, debuting as the final boss of the Guest Star ???? Star Allies Go! sub-game in Kirby Star Allies. It is a mysterious being that arrives at the site of great battles to cast judgement. Morpho Knight is a spherical creature with black skin, white... 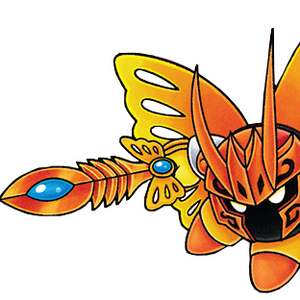 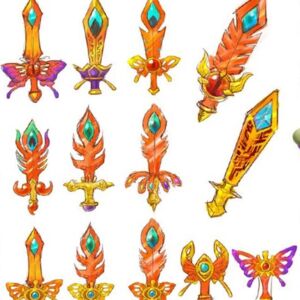 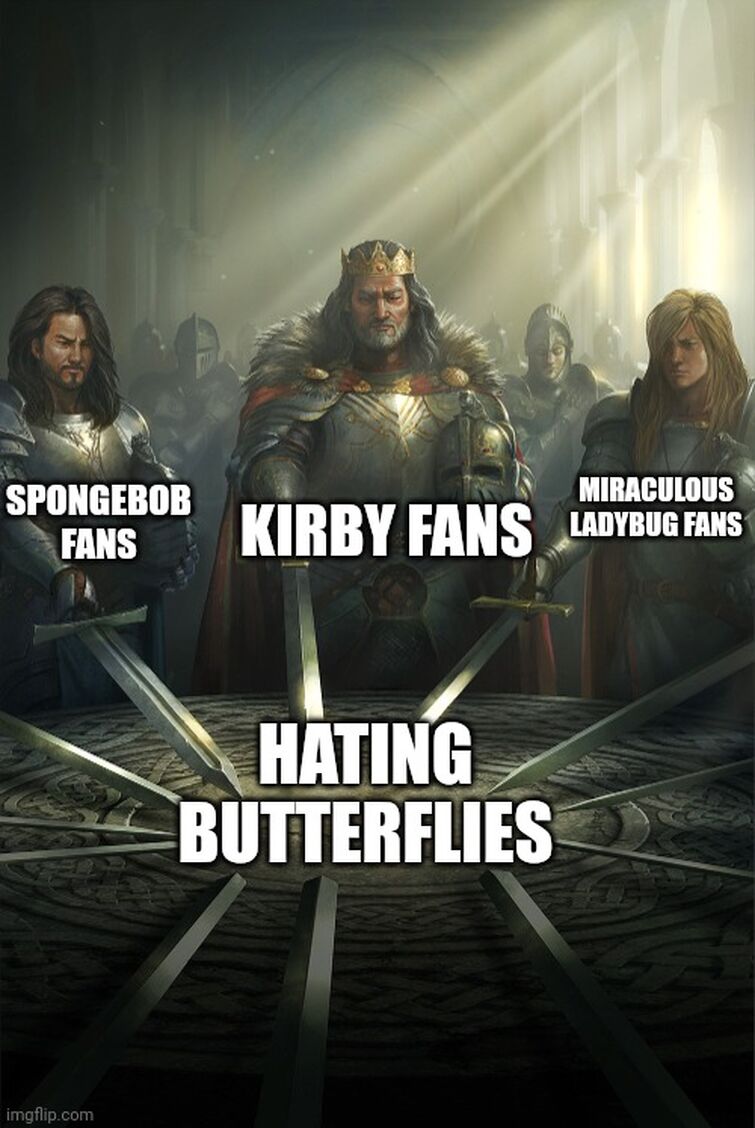 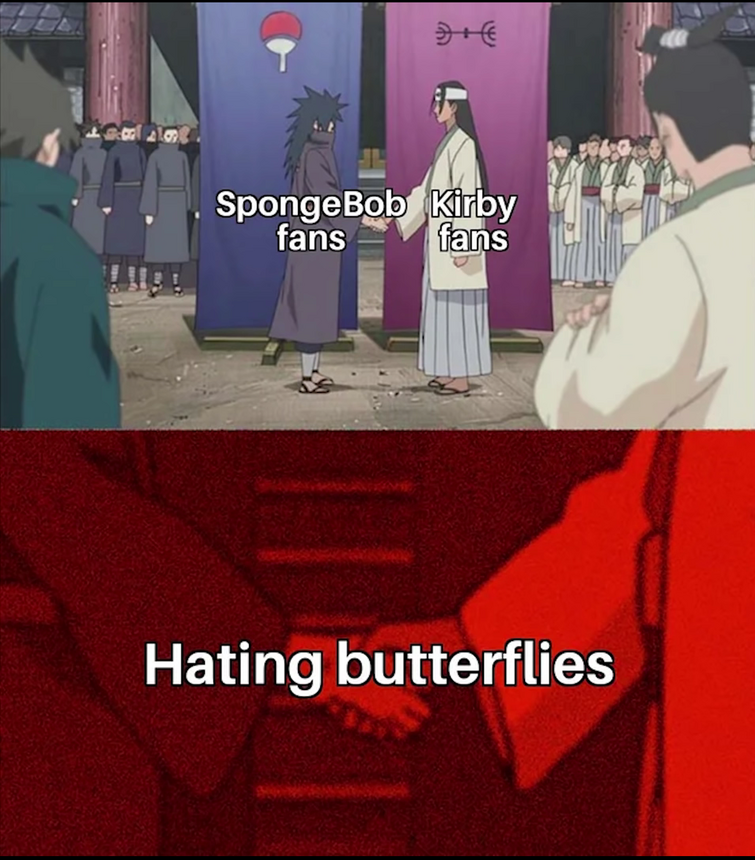 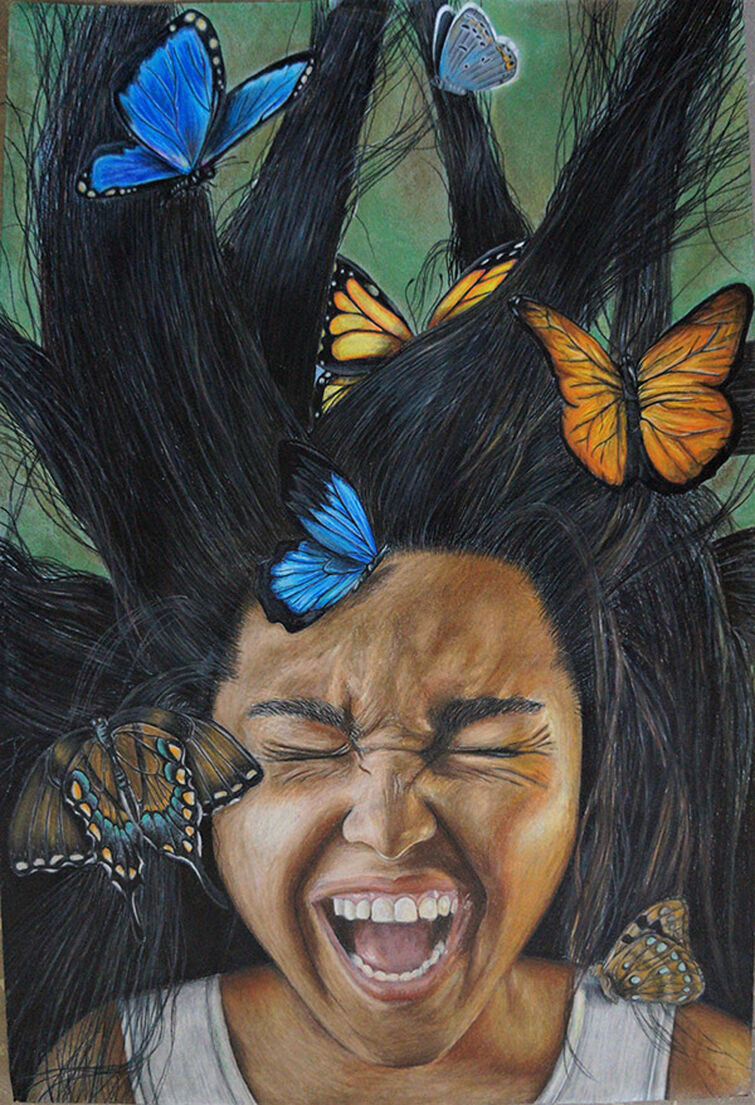 Context: The Japanese version of Morpho Knight's Gotcha Figurine in Kirby and the Forgotten Land confirms that there are multiple Butterflies of Judgement (aka the things that turn into Morpho Knight) :p 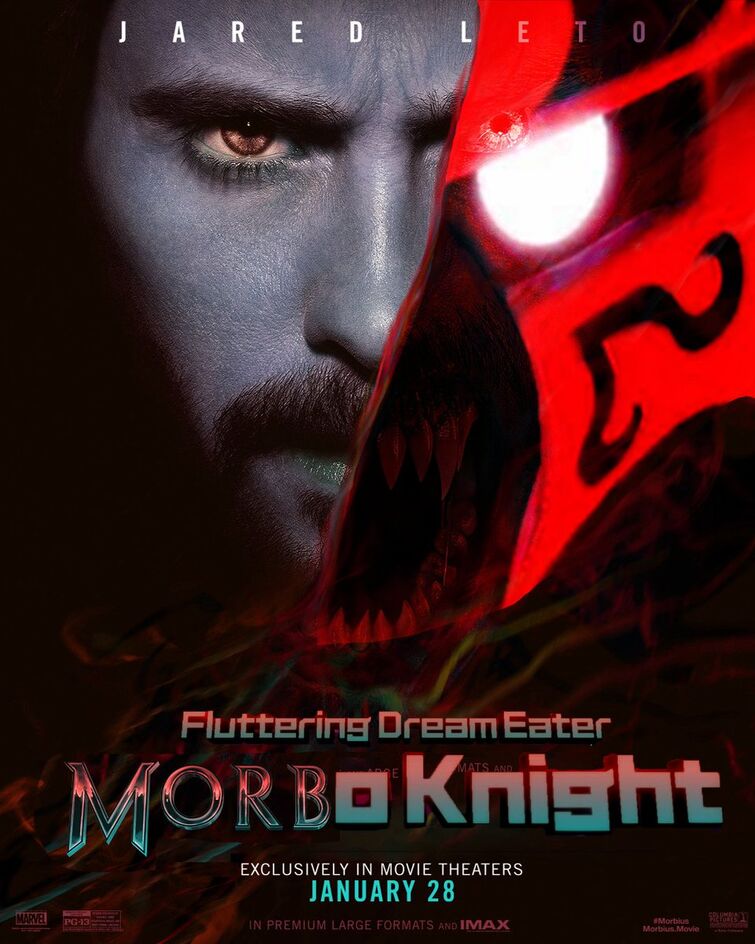 How are y’all today?

oh here’s a morpho knight for your troubles, too 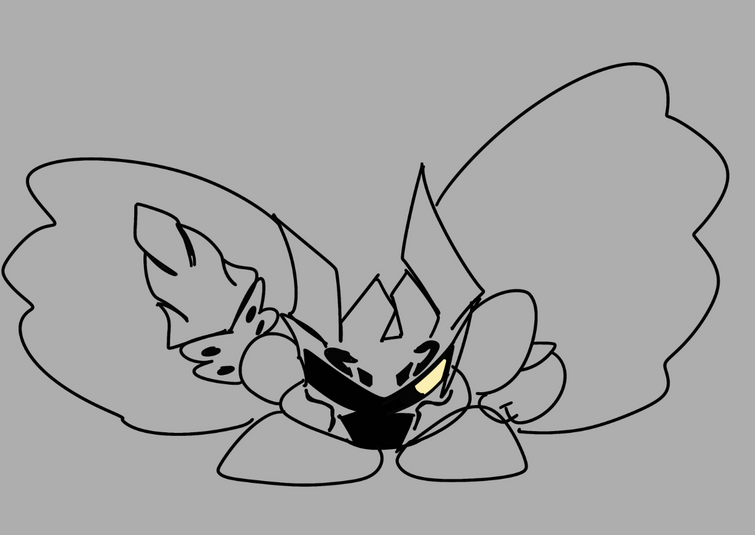 Am I allowed to advertise this? I haven’t seen anyone else advertise something like it, but I don’t think there’s a rule saying you can’t…

Morpho KnightKirby and the Forgotten Land

This may expand into a full-blown show or it might not but I just got mega-inspired by the 2003 Star Wars: Clone Wars show (the 2D one) so now here you have this

So it’s kind of like Grievous’ introduction from the Clone Wars show, where he takes on seven Jedi at once and wins. Watch out, I’m about to start explaining.

To contextualize this, the entire series before this point had been building up how much of a threat the Jedi were to the Seperatists, progressively having them achieve more and more impressive feats. Then, two of them die at Grievous’ hands before you even see him in full. Not a single Jedi had fallen onscreen before that point in the series, so this is quite a shock.

Then, a battle commences in which Grievous kills two MORE Jedi, leaves two more badly wounded (they recover eventually but are scarred by the event), and the seventh would be dead too if they hadn’t brought out a FLIPPING GUNSHIP to even out the fight. That made it EVEN. WHAT.

Grievous kills a total of two more Jedi throughout the series (he only appears three times and in the second he’s just training) and leaves another incapacitated until Mace Windu comes to help her.

Now with that out of the way… On to the actual TV show idea!

So basically, a large portion of the series is spent building up the threat of the Meta-Knights, and they’re like this unstoppable force of good. If you see them show up, you know Kirby’s winning this battle. You know, what the 2003 Clone Wars did with the Jedi.

Then, during the time of Super Star in the show (the conceptual show progresses in chronological order of the games’ timeline, but changes a few things to make it more dramatic, take out things from the older games that don’t make sense, and include Galacta Knight), Kirby is about to lose to NOVA. He calls for Meta Knight for backup, but nobody comes. The camera cuts to Meta Knight’s location, where he and several other Meta-Knights are grouped. Several more Meta-Knights are seen injured or dead, and they’re clearly on their guard.

I think you know where this is going.

Galacta Knight swoops down and effortlessly kills all but three of the Meta-Knights in an intense, epic duel. Sword, Blade, and Meta are the only three survivors of the attack, and they’re forced to flee aboard the Halberd when it arrives for backup. The Halberd itself sustains heavy damage as well, and ultimately crashes into the Secret Sea upon arrival back at Popstar.

Obvious influence? Yep. Will it be epic? Yep. Are you going to forget completely about the fact that Kirby is also fighting for his life against NOVA concurrently? Hopefully, right up until the midway point of the fight, when it’ll cut back to that.

His characterization here is basically “come back when you’re worthy” and then stays in his crystal until the heroes are ready to try again (or another villain breaks the seal, like in the Planet Robobot arc or the Star Allies arc), and it’ll just make it all the more awesome when the moment finally arrives for Morpho to atomize him.

Morpho kight sould absorb kirby and you have to play as his friends to get him back.

This was just a thought I had that I thought could be interesting. 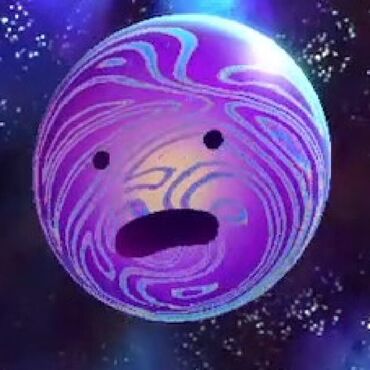 The strongest warrior in the galaxy (galactia knig 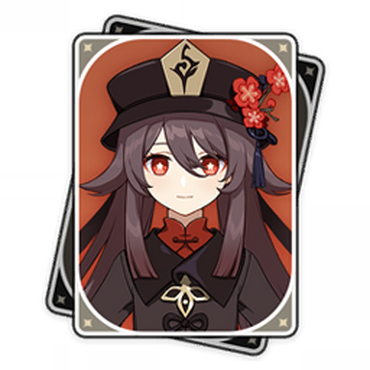 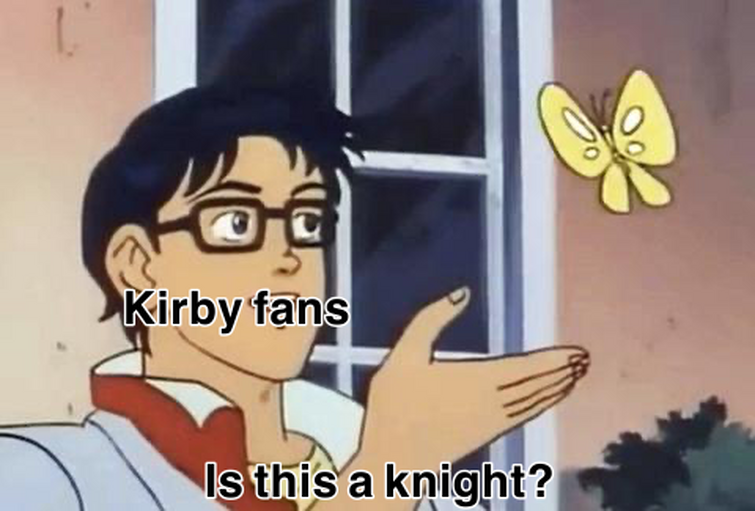 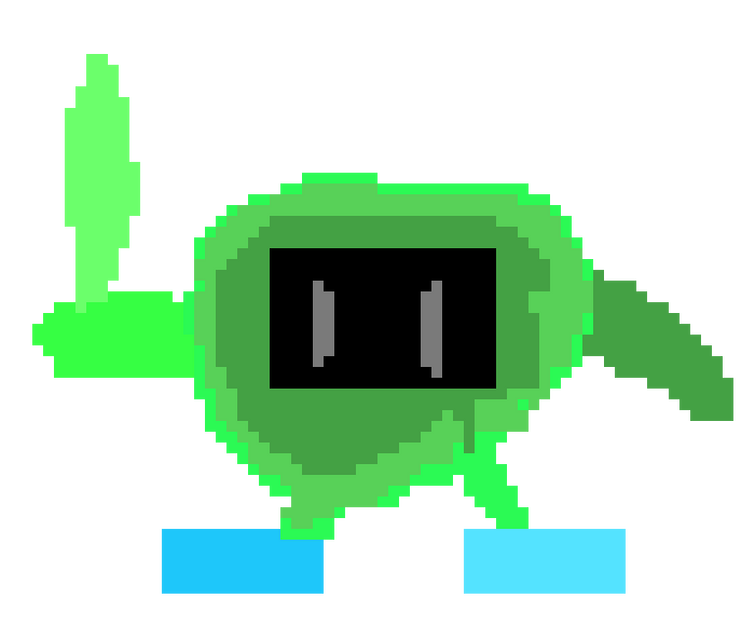 Yes, I know he's badly drawn. I'm not much of an artist in general.

"Terro Knight is a legendary hero from long ago. When he wasn't fighting battles for the ancient beings, he was keeping a malevolent being known as Morpho Knight sealed away. Unluckily for him, he became victim to its soul-absorbing powers." 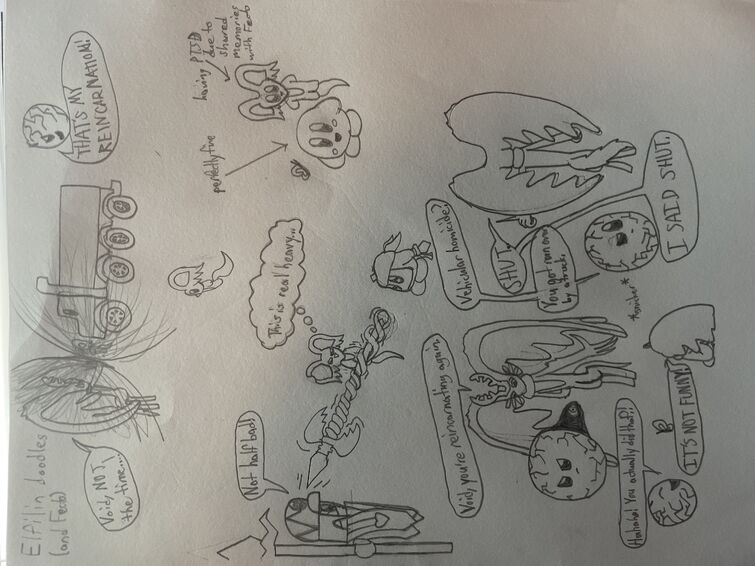 The first one was generated by the thought “what if Void was always watching all his reincarnations to see how they were doing and then just saw Kirby destroying Elfilis?” Special thanks to @Diff Juns for the headcanon that Void and Elfilis are basically frenemies.

And then just a random drawing of Elfilin doing nothing

Then we have Elfilin using his Fecto Elfilis spear, because I like to think that he can do it after the Chaos Elfilis fight. BWD is in awe, Zan is impressed, and Elfilin needs that thing to be lighter.

And to the right there… well, it seems pretty self-explanatory.

Then we got Void and Elfilis interactions. I like to think that Elfilis probably keeps Void’s emotions in check (or at least used to) so the resulting Dark Matter doesn’t destroy the next planet it finds.

And of course, Void making fun of Elfilis over how he died. Man, those were probably the greatest two minutes of Void’s life. (Of course, this drawing doesn’t coincide with the first one.)

And then another Morpho drawing, based off of my headcanon that he sort of works for Void (along with the other gods that exist in Kirby), so he reports back to Void, telling him what he did, and… well, you get it. 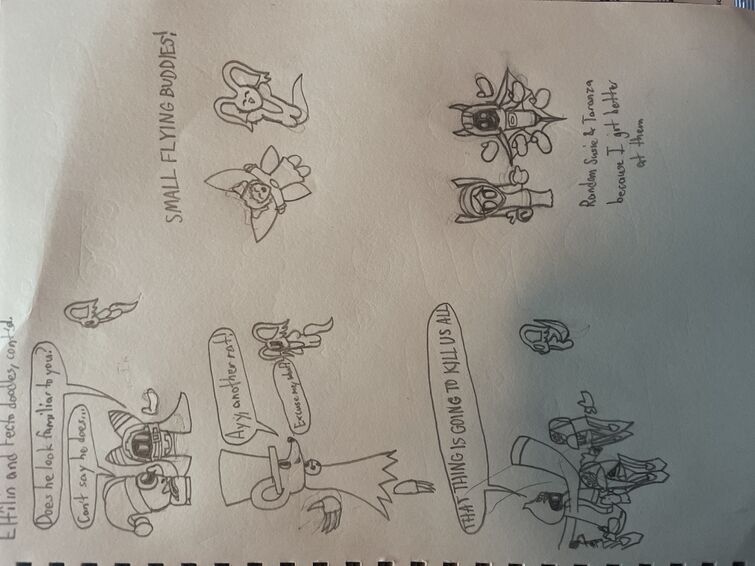 Anyway, here’s some of the Star Allies’ most notable reactions to meeting Elfilin. Based off of another post I made a while back (what, like a week? Idk). Also, I’ve been trying to improve on some characters I’m not too great with… Daroach is one such character. I was able to fit him into the scenario, but Susie and Taranza, not so much. So I just kinda shoved them in there. 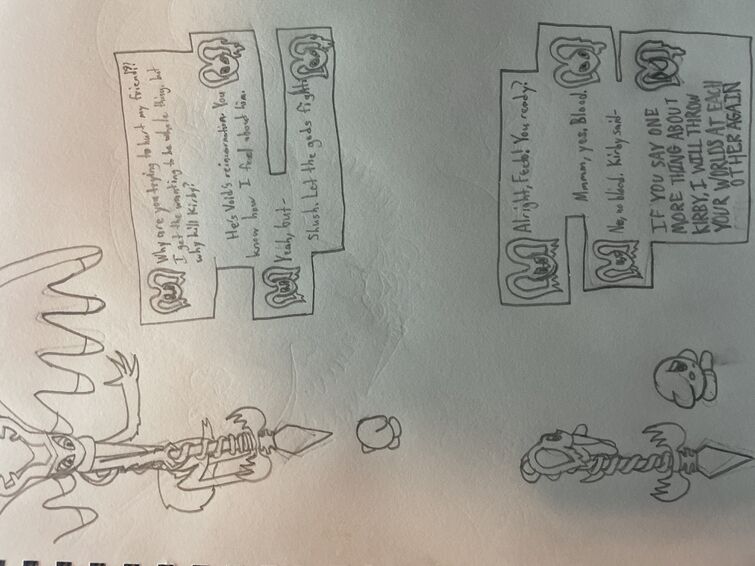 And here we are! The last page of the sketchdump!

Didja see what I did there

Anyway, I got a new headcanon recently that Fecto is still in Elfilin’s mind, and while he can’t take control, he can still talk to Elfilin in his head. Elfilin’s will is strong enough to not be swayed by him, but they do talk at certain points. The convo usually ends with Fecto telling Elfilin to shut up, hehe. 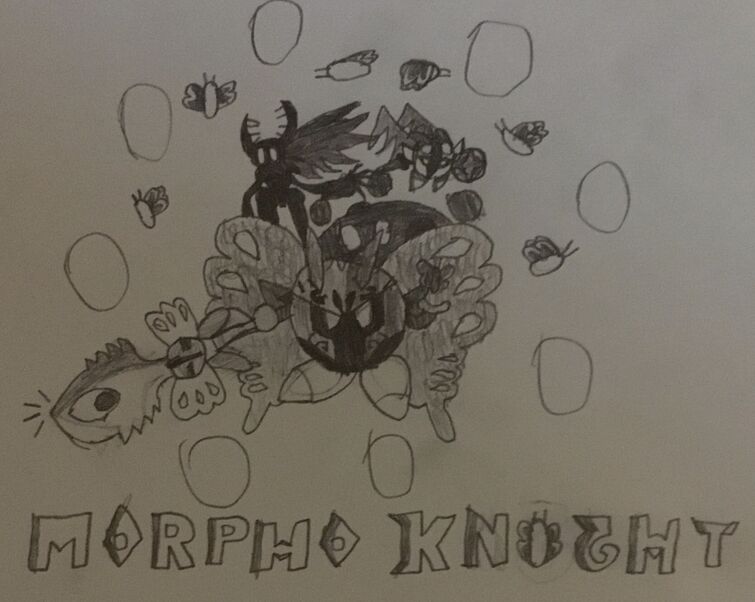 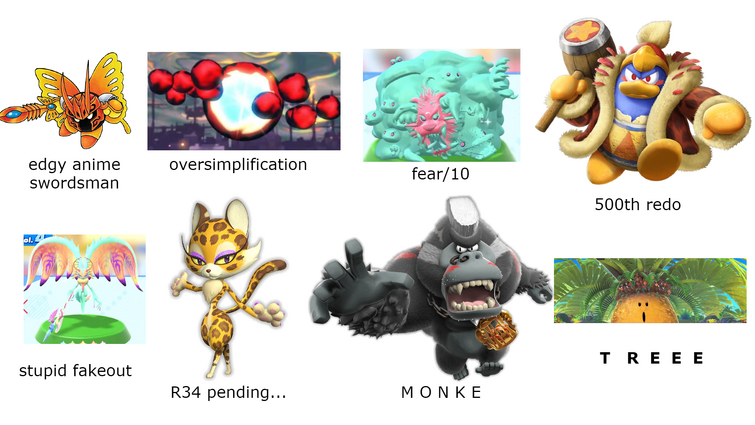