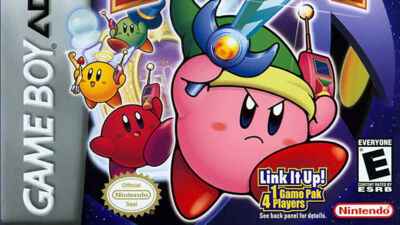 In this game, players didn't have to defeat stages in a specific, preset order. Instead, they were able to freely explore the game's vast new world and choose their own paths to victory. Along the way, Kirby could call his yellow, red, and green Kirby buddies for help by using his trusty cell... 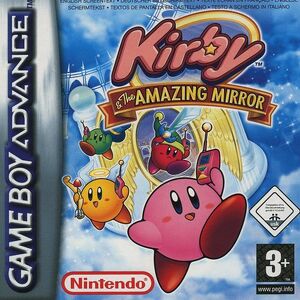 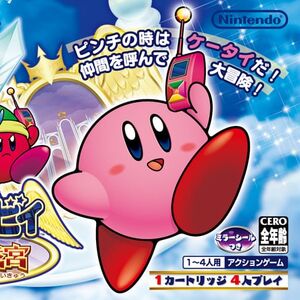 I wrote it on Wattpad. 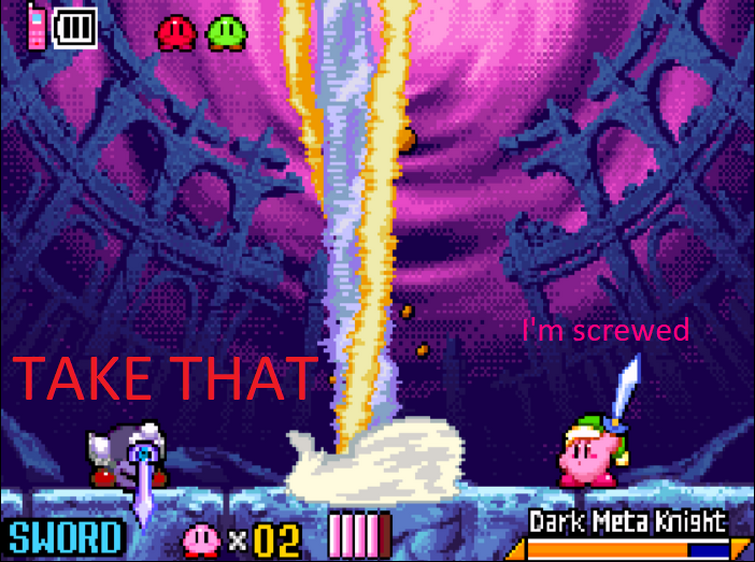 I recently completed Squeak Squad and wound up shocked by how much fun I was having during the second half of the game. I used to view the game as the worst platformer in the series, so it was shocking to me that the game is... good.

Not great, but definitely good. And after thinking about it for a little bit, I decided to ACTUALLY COMPLETE Amazing Mirror, the direct predecessor to Squeak Squad. I've had the game for about 4-3 years, but never completed it. I got stuck and never used the map for some reason.

I did it in little under a day. Here are my thoughts on the game, which is the last game to be released on a Game Boy console, and the only game in the series to not have anything in King Dedede's likeness to appear in it. 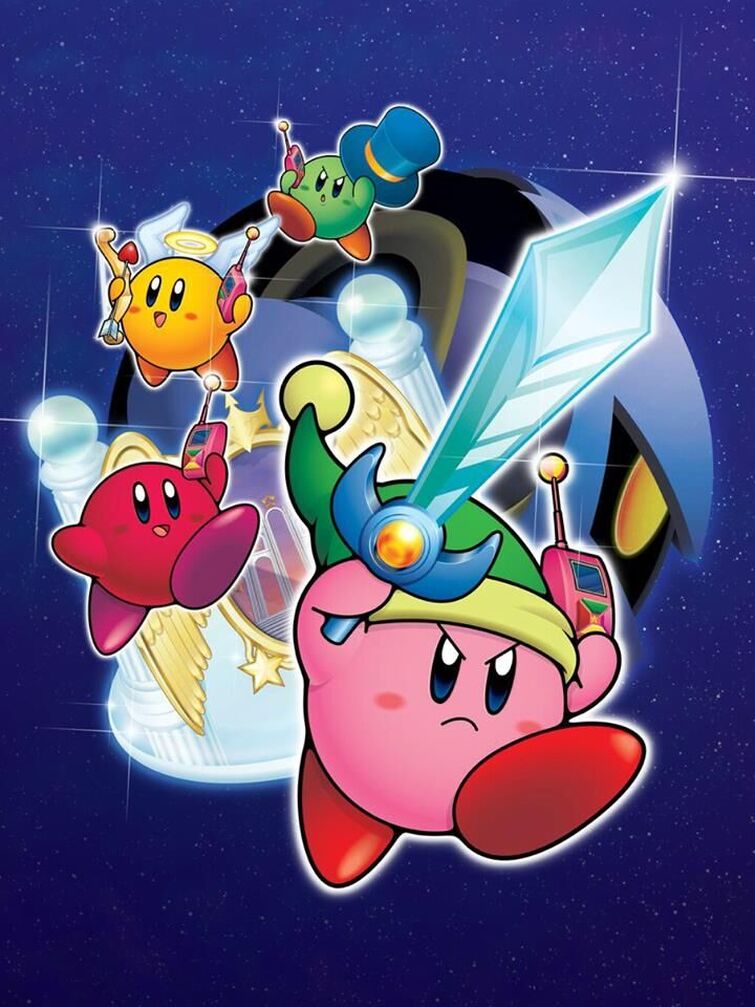 The game's story is simple: high above the skies in Popstar, is the Mirror World. Named for the amount of mirrors scattered throughout the entire place, that are able to grant wishes. One day, however, a sinister prescence took over the Mirror World, and it's Mirrors were only able to reflect bad things. Meta Knight leaps into action, but is defeated by his shadow self, Dark Meta Knight. Dark Meta Knight then splits Kirby into 4.

4 equally strong Kirbies, by the way, who all head after Dark Meta Knight and attempt to save the Mirror World.

Eventually, they defeat both DMK and the true villain, Dark Mind. Kirby's own Mirror World self, Shadow Kirby, promises to protect the Land while Kirby battles the world destroying demons that are attracted to Popstar.

Now, onto the gameplay. It's the same old, run, jump, inhale, and copy that the franchise is known for. There is a twist though, in that Amazing Mirror is a Metroidvania. That basically means that the world is all connected, rather than using maps to get from level to level. You can also complete the levels (outside of the first and second) in any order you want.

It honestly goes a long way, it's so fun seeing just what level order I go about in, instead of abiding by the level order set by the game.

Here's the order in which I completed the levels, by the way:

One thing I don't like about Amazing Mirror though is that every single time you get hit, your copy ability is lost and you need to inhale it. It gets annoying really fast. Another thing I don't like are the goal games. Seriously, it feels like they were too lazy and forgot that they could've just added in a few doors that led you back to some more rooms. That said, the goal games are pretty fun for me, so it's not a huge issue.

One more thing that I dislike is just how stupid the CPU Kirbies can be. It can be frustrating calling them for assistance and seeing them accidently do an action that harms the thing you want to do. For example, I came across a room with a heavy stone block that you need to team up and inhale in order to get moving. However, the red Kirby kept his copy ability, got rid of it, inhaled the star that contained the copy ability, SWALLOED IT, and rinsed and repeated. And the Yellow Kirby just was right next to the block.

Still, those are minor troubles at the end of the day. The level design for the game is extremely solid and fun, the bosses are pretty unique and really set the impression that this is another world, plus the music. I know I only praised Candy Constellation back when I talked about it, but the entire SOUNDTRACK is a jam. From the calming, but sinister tune of Olive Ocean, to the Peppy and Cheery Rainbow Route, to the grand adventure that is Radish Ruins, and the boss music is just. So. Good.

My favorite thing about the game is its final weapon, Master. Obtained from Meta Knight's Sword, Galaxia, Master is an absolutely INSANE version of Sword, with a stupid amount of power. It is extremely Over Powered, and that makes it so fun to use during the final battles with Dark Mind. Heck, Master is a major reason why I even tolerate having to fight the same boss 3 times over!

The treasure chests are also pretty neat in my opinion. Attempting to find all of them allows for a lot more replay value after beating the game. While I don't like the fact that a majority are just food items, it's still a blast trying to find them all.

At the end of the day, Amazing Mirror is a great spin on the Metroidvania formula with Kirby as the star. With great music, cool bosses, a lot of replay value, and a non-linear structure, the positives outweigh the negatives that are ultimately just nitpicks to me. I recommend this as a solid platformer for the GBA, and a truly great finale to the Game Boy line of Kirby games.

The story is that Dedede and bandana dee are attacked by shadow kirby which is odd for him to do that and dark bandana dee. Meta knight notices and chases them down. Kirby and gooey also notices and kirby sends a warpstar for Dedede, bandana dee and gooey while bringing the other colored kirbys. Half way through the story, it is discovered that Shadow kirby, dark meta knight, and shadow Dedede, and dark bandana dee were possessed by dark mind's minions, King D Mind, Meta D knight, Bandana mind dee and Mind Kirby. Kirby, Dedede, Meta knight and bandana waddle dee disappear with the dark mind clones. You then have to play as the mirror counterparts of the four, no difference between them, and gooey with the three kirbys. Meta knight appears and cuts his mask with a scar of dark meta knight. He got possessed. Now save the four friends, defeat Dark mind and his four minions.

The Amazing Mirror was a metroidvania game. But you must go through specific doors that can lead to different world but some doors are very hard to get to.(Okay maybe their called mirror doors) Some lead to the boss but the game basically says "screw you player" And go to a star that lead back to the hub world. Maybe they can make it like castlevania maps. Like Castlevania Symphony of the Night maps. And they can expand the multiplayer. They can do 8 player gamplay. There can be 4 Kirbys, dedede, meta knight, bandana dee and gooey. (Gooey can use his dark matter abilities) You can have 8 switches through online or 4 switches with splitscreen through offline connection.

Kirbo and the Amazing Mirror

I don't have much to say about this so yeah 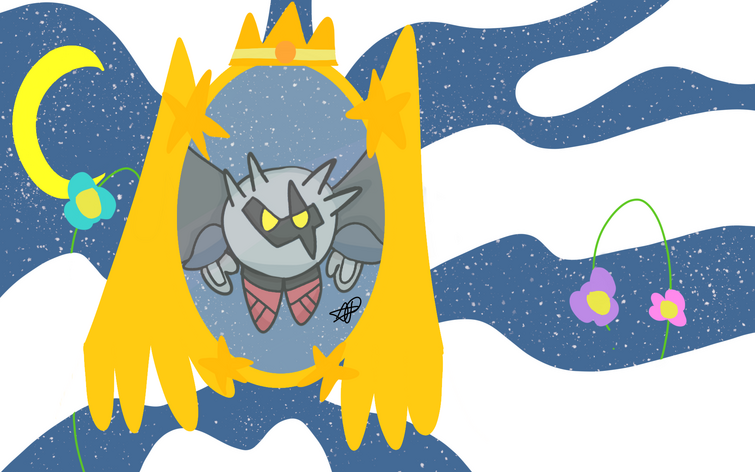 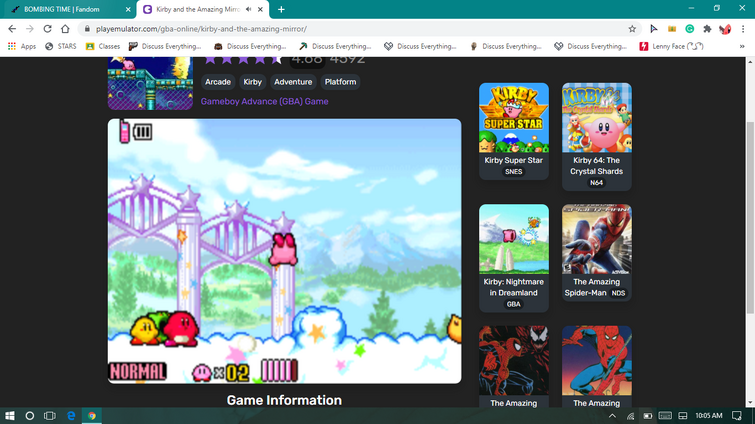 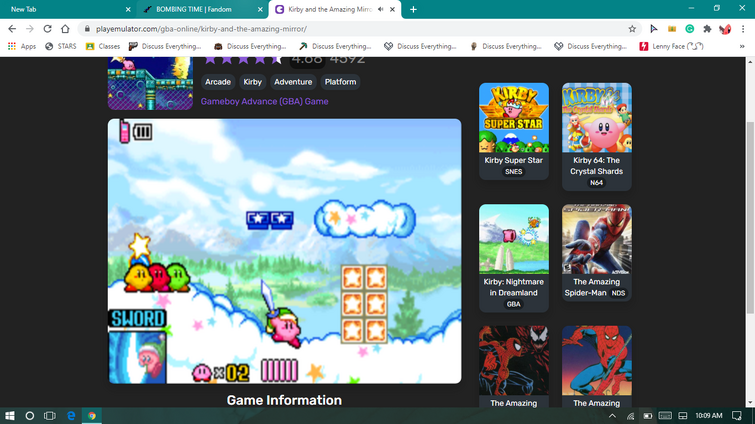 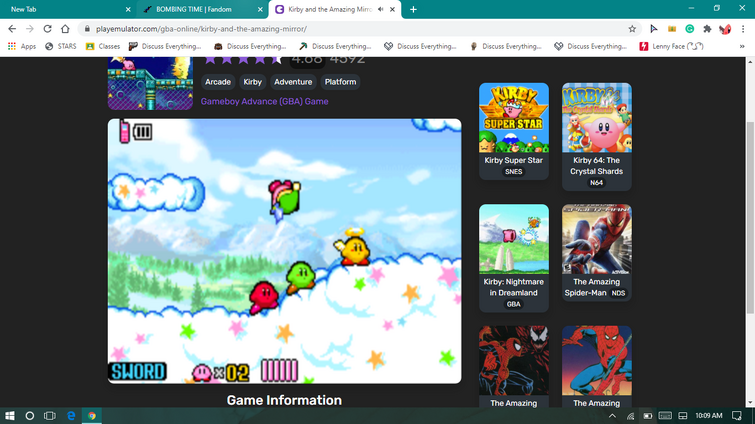 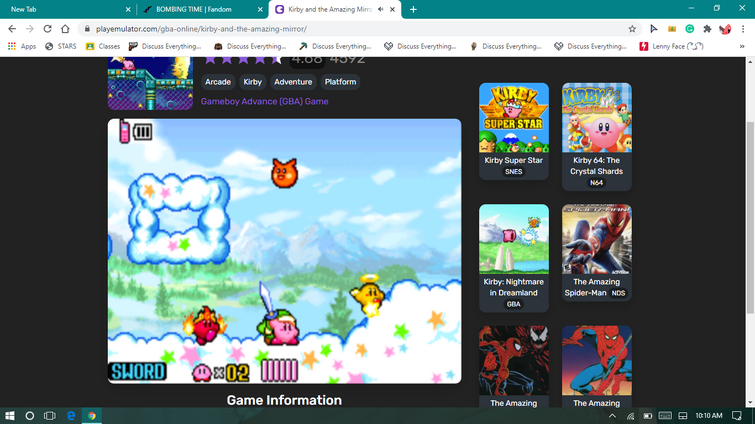 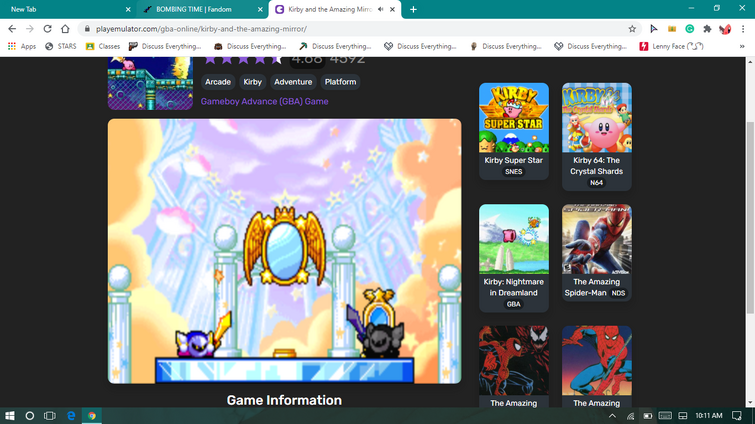 Btw stay safe even kirby himself

Are Dark Mind and Dark Meta Knight the same person, because I've been really confused about this for a long time. I think they're the same person but reading both of their articles makes me think that their totally different people.

I'm still making a story and it's being updated every few weeks here:

The way I'm releasing this story is like a video game that costs 60 dollars but is only 20 minutes long and then gets updated constantly until it's finished. I don't actually know any games like that, but that's this story. I still haven't finished the story, but 20 pages are out. This is a story on a bigger scale than Kirboi Star Allies... And if this series succeeds I'm planning an extra part of the story that should be half the size of the others... And it'll probably be really sloppy, but IDK. This story is mostly good at tying up loose ends... So I guess when part three starts I'm going to start posting poles to change the direction of the story. Anyway... I don't think anyone's read all of the pages of this story so far but me, so check it out, please...

Also some of the tags might not make sense... But in a month or two, I think that will change...

Marx, Kirby, and the Star Allies | FandomThis is where I'm going to be posting updates for…kirby.fandom.com 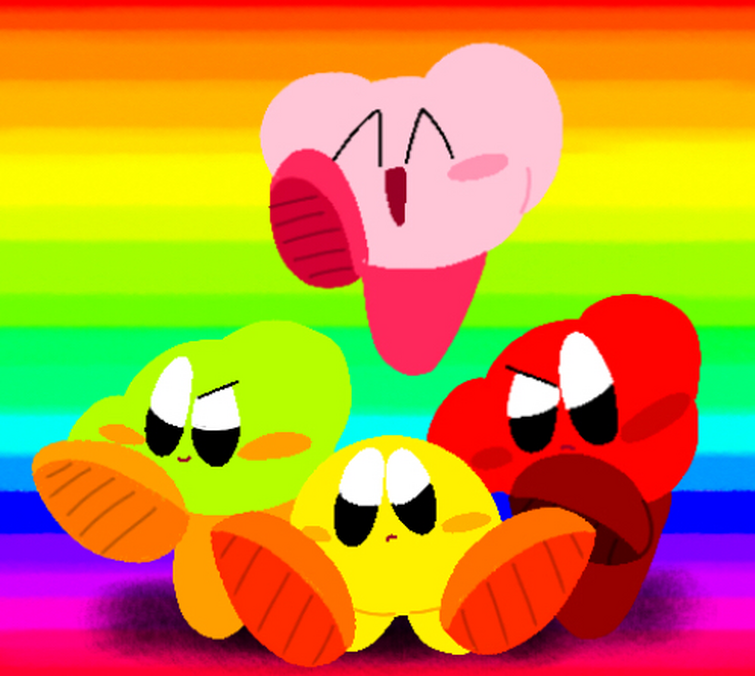